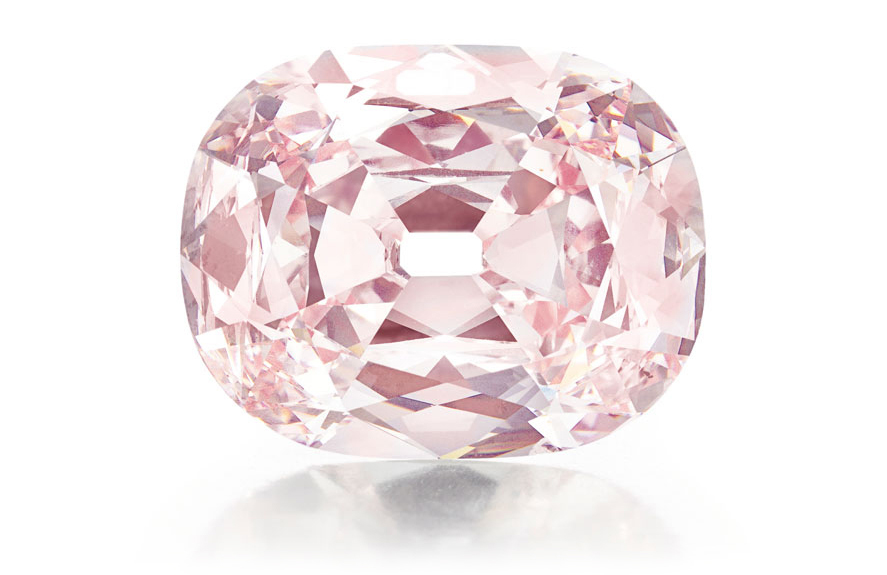 The incredible 34.65-carat pink Princie Diamond fetched over $39 million at Christie’s New York on April 16. The rare fancy-intense pink diamond’s sale price set a new record for any jewel sold at Christie’s, surpassing the previous house record of $24.3 million for the sale of the Wittelsbach diamond in December 2008. Christie’s stated that the Princie also set a new record for the most valuable Golconda diamond ever sold at auction.

The Princie Diamond is not only remarkable for its size and color, but for its origin and royal provenance. A historic diamond, the Princie’s origins can be traced to the famed Indian Golconda mines, an ancient source which produced some of the world’s most renowned diamonds, including the Hope. The rare pink was owned by Hyderabad’s royal family during the Mughal Empire and emerged at auction for the first time in 1960 as the “Property of a Gentleman,” later revealed to be the Nizam of Hyderabad. Van Cleef & Arpels’ London branch bought the diamond for £46,000. The pink diamond was named “Princie” in honor of the 14-year-old Prince of Baroda, who attended a party at Van Cleef & Arpels’ Paris store with his mother Maharani Sita Devi. Until yesterday, the diamond had not appeared at auction for over fifty years.

“A major event took place in the global auction industry with the record breaking sale of The Princie Diamond at Christie’s New York,” said Rahul Kadakia, Head of Jewelry for Christie’s Americas and Switzerland. “Aside from Christie’s sale of the legendary Collection of Elizabeth Taylor, this was the most successful jewelry auction ever held in the United States, and Christie’s was proud to have orchestrated the sale of such an historic gemstone.”

The Princie Diamond was sold to an anonymous collector bidding by phone.

Christie’s April auction of over 290 jewels garnered a total of $81,358,700. Top lots included a 30.32-carat D-color diamond, which fetched the second highest price of over $4.4 million. A 23.30-carat marquise-cut diamond ring by Harry Winston sold for over $3.2 million, and a rare 3-strand natural pearl necklace fetched over $1.1 million at the day-long auction.